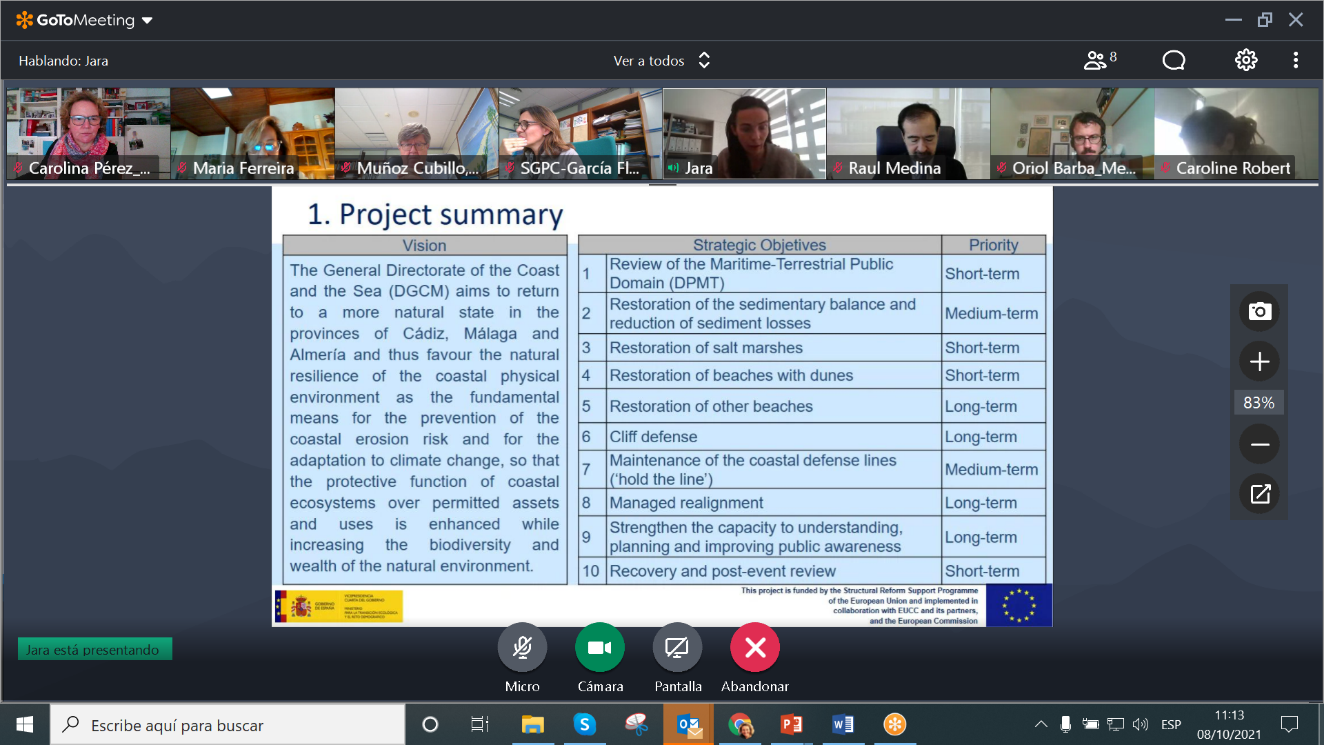 The Coastal Protection Strategies for the provinces or Cádiz, Málaga and Almeria are completed and ready for official approval

MedCities has led the communication and stakeholders engagement activities, engaging among others the member city of Málaga.

The development of Coastal Protection Strategies considering the climate change effects for the provinces of Cádiz, Málaga and Almería is an initiative financed by the EC´s Structural Reform Support Programme upon request of the Spanish Ministry for the Ecological Transition and the Demographic Challenge (MITECO), Directorate General for the Coast and the Sea (DGCS).

The mission of the Strategies is to support the decision-making and management of the actions to be carried out by DGCM in the provinces of Cádiz, Málaga and Almería during the current management cycle, from the present (reference year 2020) until 2045, within the framework of its competences for the management of coastal erosion risk (protection of the coast), maximizing synergies with flood risk management and incorporating adaptation to climate change.

The preparation of the Strategies began in March 2019 and, along 30 months of work, has been organized into the following 3 successive phases: 1) Diagnosis, to improve the understanding of coastal protection issues, as well as to understand the perception of coastal problems by relevant actors and to analyse the governance framework; 2) Proposal of measures, with the objective of identifying the actions to be carried out by the DGCM,  within the framework of its competences; and 3) Final reporting, whose objective is to rank and guide decision-making steps regarding the implementation of these actions.

The development of the Strategies included two consultation phases. A first moment during the diagnosis phase addressed to the main local stakeholders (January 2020) gathered information on the perception of coastal protection management problems in order to take this information into account in the Integrated Diagnosis, as well as on best practices and lessons learned on coastal management actions already implemented in Andalusia. These contributions were incorporated into the Catalogue of measures. A second consultation aimed at the general public, launched online in April 2021, in which the work carried out during the phase dedicated to the proposal of measures (catalogue of measures and their selection and prioritisation) was presented in order to gather public comments and take them into consideration for the final drafting of the Strategies. The city of Malaga was strongly engaged in both consultation moments.

With this Strategies, articulated through 10 Strategic Objectives, the DGCS aims to return to a more natural state in the provinces of Cádiz, Málaga and Almería and thus favour the natural resilience of the coastal physical environment as the fundamental means for the prevention of the coastal erosion risk and for the adaptation to climate change, so that the protective function of coastal ecosystems over permitted assets and uses is enhanced while increasing the biodiversity and wealth of the natural environment.

The Strategies have been elaborated by a European consortia led by Coastal & Marine Union (EUCC) under the technical direction of the Environmental Hydraulics Institute of the University of Cantabria (IHCantabria) with the participation of the University of Cádiz and MedCities – in charge of communication and local stakeholders engagement- in collaboration and under the supervision of MITECO.