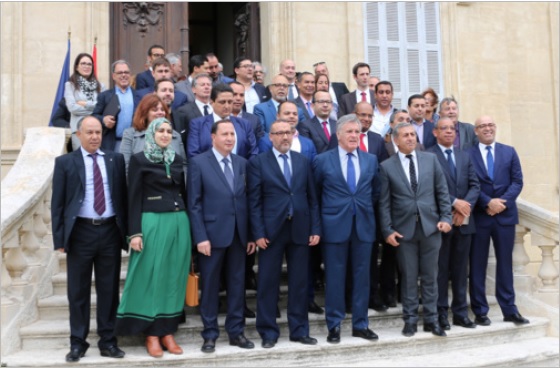 From 10 to 14th May 2017, a delegation of high-level officials from Tangiers, led by the Mayor Mr. ABDELLAOUI, visited Marseille as part of a process of rapprochement between the two cities in order to facilitate exchanges for the economic and touristic development of the two territories.

The cooperation between the cities of Tangiers and Marseille has been strengthened during the past three years. A cooperation agreement was signed in 2014 between the Grand Port Maritime de Marseille (GPMM), the National Agency of Moroccan Port (Agence Nationale des Ports Marocains) and the Special Agency Tanger Med (Agence Spéciale Tanger Med). Mr. Roatta has undertaken many official missions to Tangiers since 2015, on the occasion of the MedCOP Climate in July 2016 or during the 4th Forum of Local and Regional Authorities of the Mediterranean on 30 November 2016.

This visit represents a catalyst for cooperation, with the following highlights:

1. A bilateral meeting was held between the Mayor of Marseille, Mr. Jean Claude Gaudin, and the Mayor of Tangiers on 11 May 2017 in order to formalize the signature of a letter of intention in cooperation on the following domains:

2. Thematic meetings with important stakeholders of the territory were held on 11 and 12 May 2017:

– The economic breakfast “Marseille-Tangiers: Developing our enterprises and territories in a sustainable way” in partnership with the Consulate General of Morocco at Marseille, the Chamber of Commerce and Industry of Marseille Provence (CCIMP) and the Finances & Conseil Méditerranée. On the occasion of this event the delegation of Tangiers emphasized its qualities as first city on foreign direct investment, second commercial port, and fourth touristic city of Morocco.

More than 80 people attended these fruitful meetings. Long-term economic prospects between the two cities were identified on the issues of port, creation of business incubators, development of sustainable neighbourhoods, employment and youth mobility. The need for a common involvement in international negotiations on climate change around a shared Mediterranean vision of sustainable development was also highlighted. Also, a transversal cooperation mission with an entrepreneurial dimension was first outlined.

– Other visits and meetings held:

• Provence Promotion for its territorial marketing,

• the Port de Marseille Fos which has validate a maritime line between Marseille and Tangiers for freight and passengers,

• the Société des Eaux de Marseille (SEM) which presented the many actions carried out in Morocco, particularly the Smart port project in Tanger Med, which could be reproduced over Tangiers municipal infrastructures,

• la Municipal Direction of the Sea, for its policy of valorisation and development of the coastline and the marine environment as well as for the nautical municipal policy, particularly with regards to OG 2024 project,

• Kedge Business School in order to reinforce the exchanges of young students.