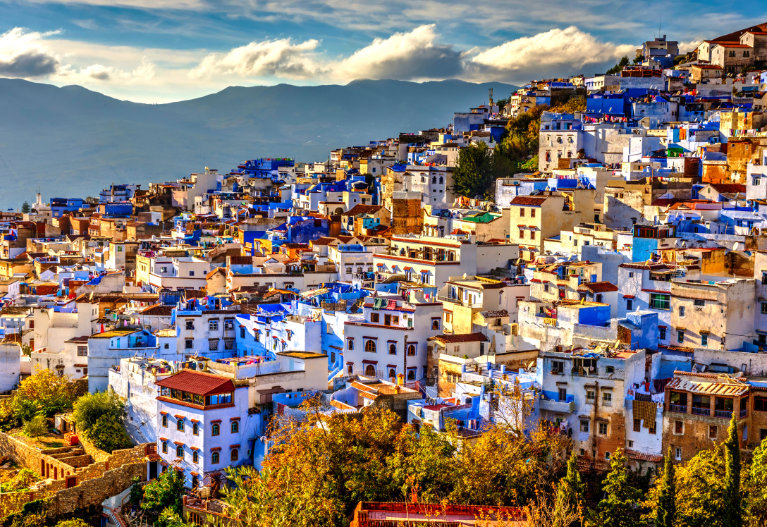 MedCities and the city council of Chefchaouen organised the event : “Local policies for sustainable tourism, artisanat and the agri-food sector”. The event was organized in a hybrid format and brought together around 50 participants through an online meeting and at the Chefchaouen Eco Center.

The topics discussed during the fruitful discussion focused on the promotion and involvement of the tourism, craft and agri-food sector in the strategies of environmental responsibility of the territory, the role of municipalities in the creation and implementation of such local strategies, the participation of young people in the promotion of local projects, awareness and visibility to the public, among others.

The Mayor of Chefchaouen opened the session, which counted on the participation of the Berguedà Development Agency, the City Councils of Saldes and Olot (both in Catalonia). The Mayor recalled the commitment of the city with environmental issues and the principle of sustainability.Mr. Josep Canals, Secretary General of MedCities, thanked Chefchaouen City Council for its commitment and explained the actions of the REFGOLMED project in Lebanon and Tunisia. Finally, the representative of the Catalan Agency for Development Cooperation in Morocco, Mrs. Habiba El Mouali, briefly explained the areas of action of the agency and thanked the participants and partners of the project for the effort and dedication of the latter months.

Mr. Josep Capellà, expert in sustainable tourism strategies, discussed the principles, challenges and objectives of sustainable tourism, followed by detailed and inspiring presentations by representatives of the Berguedà Development Agency, the City Councils of Saldes and Olot on its commitment to sustainability, quality and the well-being of the territory.

The cities and institutions that attended the exchange include: elected and technical team of Chefchaouen City Council, Olot City Council (Catalonia), Berguedà Development Agency (Catalonia), Saldes City Council (Catalonia), Barcelona Provincial Council, Catalan Agency for Development Cooperation, MedCities, ACABA Consultancy, representatives of the tourism, agri-food and artisanal sector of Chefchaouen (beneficiaries of the project), trainers and students of the vocational training center in Chefchaouen, members of the CODIBER cooperative, in charge of coordinating and installing the new solar panel system at the Eco Center.

The REFGOLMED project in Chefchaouen was born from a diagnosis made by the city council, which prioritizes the promotion of the local economy with a green and socially inclusive vision. The city showed special interest from the beginning in working with young people and, on the other hand, accompanying the local tourism, craft and agri-food sector in its commitment to solutions that reduce the ecological footprint and promote social responsibility.

The results achieved include:

o The training and awareness of 30 young students on renewable energy and installation of photovoltaic energy systems, which aroused much interest, by the cooperatives CODIBER, Chefchaouen, and AZIMUT, based in Barcelona.

o The installation by a cooperative of electricians in the city of a photovoltaic energy system in the Eco Center, a space for training and awareness on ecology managed by the commune urbaine where training visits will continue.

o The training and awareness of 30 companies and entities in the tourism, craft and agri-food sector in the hands of experts specializing in energy efficiency, social innovation and cooperativism, and e-commerce strategies.

o Training and awareness of the city council staff on the promotion of local cooperatives and strategies to foster employment for young people in the city.