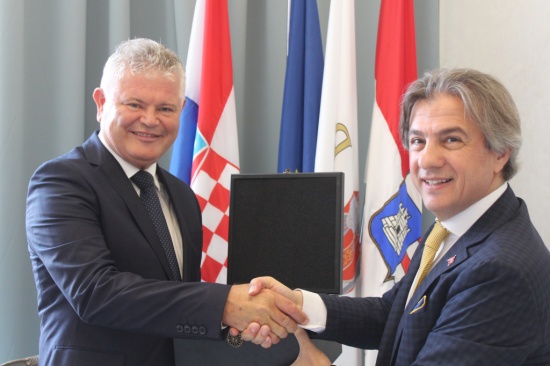 Meeting between the sister- cities of Dubrovnik, Croatia, and Beyoglu, Istanbul, Turkey.

Last 9-10th of July, Mayor Vlahusic from Dubrovnik, received Mayor Ahmet M. Demircan from Beyoglu (Istanbul) and its delegation. An official protocol reception was held in the Office of the Mayor, in the presence of the Turkish Ambassador to Croatia, His Excellency E. Ahmet Tuta and the Honorary General Consul of the Republic of Turkey in Dubrovnik, Ms. Vesna Miovic.

Mayor Vlahusic and Mayor Demircan discussed the lengthy historical ties between Dubrovnik and Istanbul, and furthering mutual cooperation, particularly in the fields of culture and tourism, including the need of identifying an appropriate site for the opening of an honorary General Consulate of Turkey in Dubrovnik. An emphasis was given to the priority of establishing year round direct connections between Istanbul and Dubrovnik with Turkish Airlines.

Following a reception in the Small Council Hall, the two mayors continued with a work meeting between city services and representatives of Turkish companies and investors residing in Dubrovnik, which included representatives from Pucic Palace, Dogus Group, Rixos Libertas, Kent Bank and Turkish Airlines. Those present unanimously thanked the City for its collaboration and confirmed the exceptional interest of Turkish investors for this region.

The Imam Salkan Efendi Heric in Dubrovnik also attended the meeting, stressing how the City of Dubrovnik supports the construction of an Islamic Center in the district of Gruz, and further emphasizing an Award of Recognition for the contribution to the development and strengthening of religious and cultural identity, particularly for the Muslim community in the Republic of Croatia. This award was presented to Mayor Andro Vlahusic by Mufti Dr. Aziz ef. Hasanovic in Croatian Parliament in April of this year.

As a point of interest, a Sistership Charter between the two cities was signed in Beyoglu in October 2015. Beyoglu is located in the European sector of Istanbul, and is one of the most developed municipalities in Turkey, recognized as the “Pearl of Istanbul”. Close diplomatic and other ties between Dubrovnik and Istanbul date to the beginning of the 18th century, when the Dubrovnik Republic opened a consulate in the city center of today.

For more pictures of the meeting…