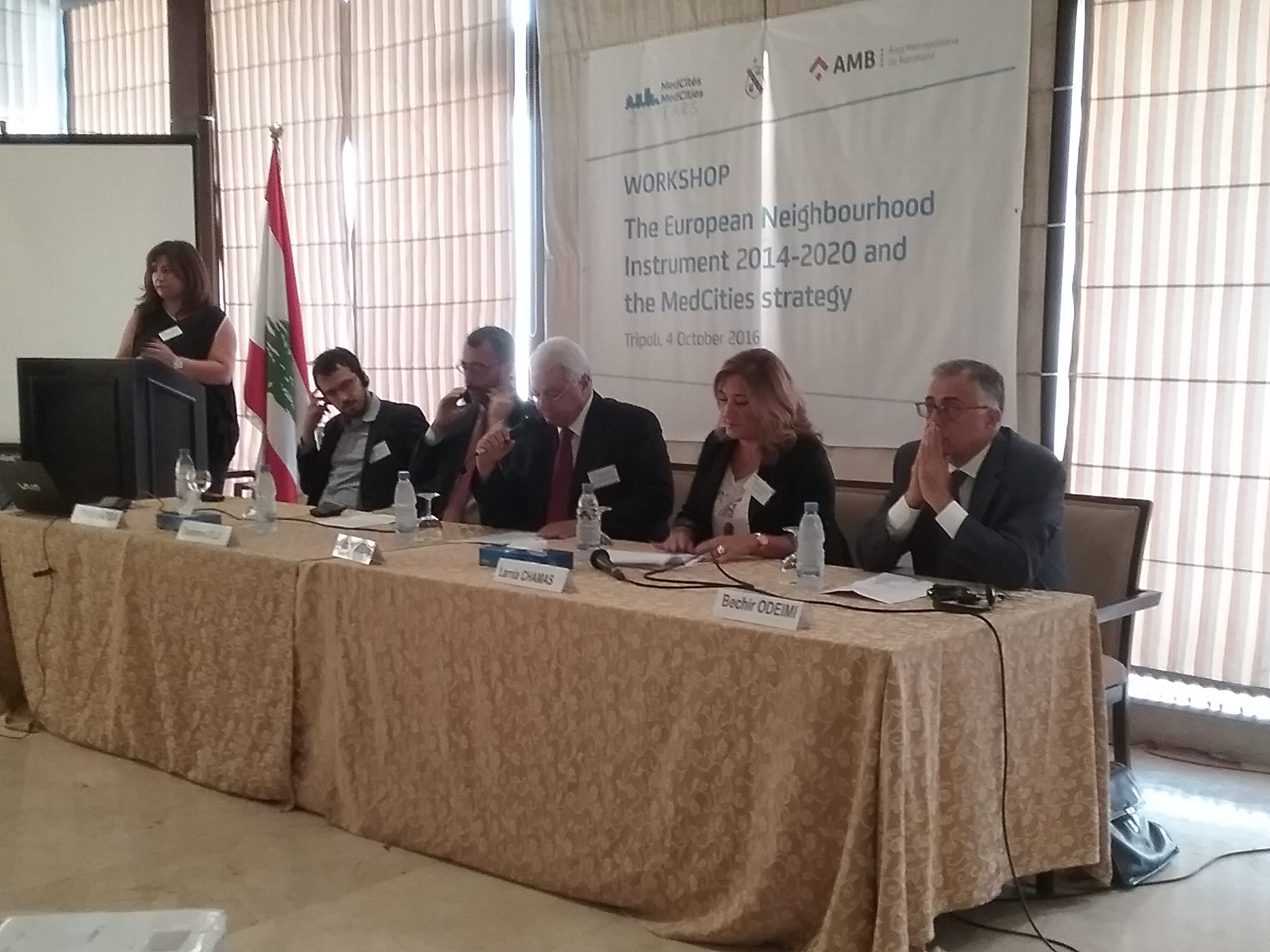 Last 4 October 2016, more than 50 people, representatives of MedCities’ members and stakeholders in Lebanon, participated in a seminar on the opportunities of funding through the ENI Programme which will be launched in the following months.

The workshop was organised by the Knowledge Transfer Centre (KTC) of Al Fayhaa, with the presence of the President of the Union of Municipalities of Al Fayhaa Mayor of Tripoli, Eng. Ahmad Kamareddine, representative of the European Union, Mr. GianAndrea Villa, representative of Medcities network Mr. Oriol Barba, and international expert program ENI CBCMED Mr. Albert Sorrosal.

Mr. Albert Sorrosal presented the ENI Mediterranean Sea Basin programme, focusing on the objectives and priorities, the opportunities entailed for municipalities as well as the administrative and management issues that should be taken into consideration.

Mr. Oriol Barba, technical Director of MedCities General Secretariat presented the priorities for the network as well as the type of the support that the network could provide to its cities members. The participants shared their concerns about participating in the programme and also their ideas and possible future projects.

President Kamareddine stressed the fact that municipalities have the ability to overcome geographical boundaries and help each other. He stated that: “I am pleased to meet with this elite group of partners and colleagues from inside and outside Lebanon in this workshop to emphasize the depth of the relationship between the European Union and the Urban community of Al Fyahaa since more than 10 years, during which the implementation of dozens of projects in the cities of the Union of municipalities of Al Fayhaa led to improving the image of the cities of Al-Fayhaa.” He mentioned projects such as, PACEM funded by the European Union, which drew a unique development in Lebanon, and is still a reference for all those interested in planning project. GouvAirnance, which recently carried out and significantly contributed to the improvement of air quality in the cities of the Union through monitoring stations established in the cities of Al-Fayhaa, and last but not least, MESP project, which had an impact on the ports and its surrounding residential areas in terms of water, air quality, and noise.

Kamareddine added that the past few years have witnessed close cooperation and support through the creation of the KTC-knowledge transfer center- established in the Union of Municipalities of Fayhaa through the USUDS project as a support of the Lebanese municipalities.

Finally, both Mr. Villa and Mr. Barba mentioned the importance of the projects carried out in Tripoli and some other Lebanese cities, and stressed about the EU’s support in collaboration with a network of Mediterranean cities that reduce the burden on the Lebanese citizen, and called for closer coordination and cooperation between the Union and the municipalities, stressing the projects that achieve the goals set forth, and the selection of projects that are beneficial for the development of cities.