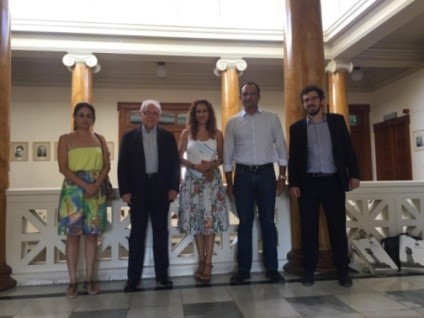 MedCities’ Mission to Cyprus and Lebanon

One-day training will be held in Tripoli about the ENI CBC MED programme, by Al-Fayhaa KTC, on 9th September 2017.

In July 2017, MedCities realized a three-day mission to Cyprus and Lebanon, with the aim to identify the priorities of MedCities members and, also, their vision towards the EU financed ENI CBCMED programme.

The one-day mission to Cyprus targeted the two cities of Limassol and Larnaca. MedCities secretariat and KTC of Al-Fayhaa joined the visit.

Limassol expressed priorities towards environmental issues such as:
1) Corrosion of sea due to maritime traffic
2) Smart cities, implementation of infrastructure
3) Control of beaches related to passage of ships.

The two-day mission to Lebanon started with a first meeting with Mr.Khalil Harfouch, the President of Jezzine Union/Mayor of Jezzine. Mr.Harfouch presented the projects that the Union is working upon, such as:
1) Opening a tourist information Office
2) Implementing an integrated solid wastes management strategy
3) Developing a GIS system
4) Rehabilitating the historical buildings carrying the heritage of Lebanese/Turkish and Italian architecture.

The second meeting was with the President of Batroun Union/Mayor of Batroun, Mr. Marcellino EL Hark. The priorities of the city include:
1) A wooden pedestrian walkway all along the sea coastal zone
2) The management of solid wastes.
He expressed his interest about the impact of mass fishing in the Mediterranen Sea.
Within an ongoing technical assitance, MedCities will support Batroun by launching a feasibility study to activate the tourism in the area.

Finally, the meeting with the president of the Union of AL Fayhaa /Mayor of Tripoli, Eng. Ahmad Kamareddine tackled different subjects such as:
1) The General Assembly which will be hosted by Tripoli on 7th and 8th November 2017 together with a seminar on Local development.
2) Technical mission to Barcelona expected on 13th September 2017 to visit some waste management plants and incinerator
3) The possibility of an expert from Barcelona to join a round table about landfill closure in Tripoli.

MEDCITIES inform all met presidents/ mayors that a one-day training will be held in Tripoli about the ENI CBC MED programme, by Al-Fayhaa KTC on 9th September 2017; with the objective to provide a clear analysis criteria regarding the launched first call for standard projects, which could support member cities within the on-going writing proposals.