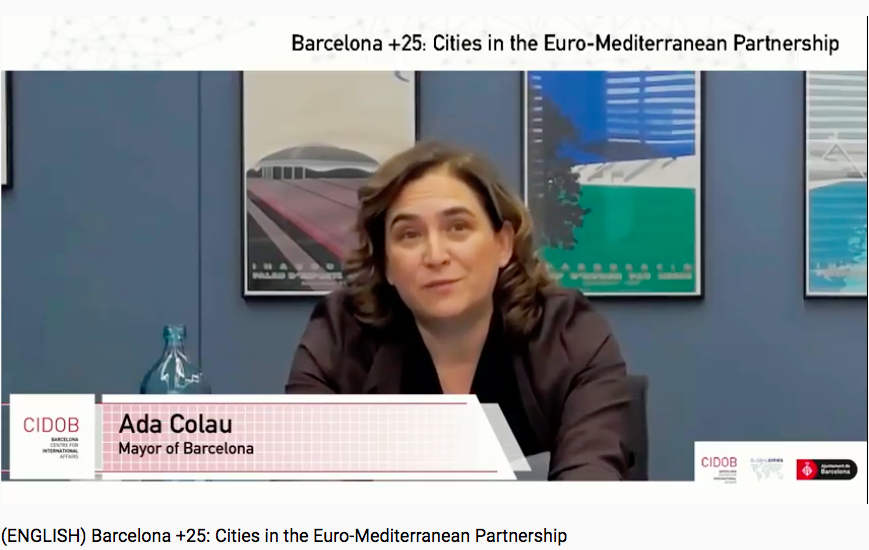 MedCities members contributes to the Bcn+25 discussion: Cities in the Euro-Mediterranean Partnership

This November 2020 marks the 25th anniversary of the launch of the Euro-Mediterranean Partnership, also known as Barcelona Process, a milestone in regional cooperation and multilateralism. For this official anniversary, MedCities collaborates with CIDOB in the conference that reunited some of MedCities members as Barcelona, Tunis and Izmir.

Mayors of six Mediterranean cities, with Barcelona and Tunis as MedCities members, discussed their views on the region and the way cities can contribute to strengthening cooperation in the future. After the welcoming by CIDOB– the organizer- director, Mr. Pol Morillas, the Mayor of Barcelona, Mrs. Ada Colau took the floor to underlined the need of building effective bridges between cities in both Mediterranean shores with the aim of working together in important matters like climate chaange emergency, the massive migration (also caused by ecological crisis) and the need of a better, safer and cleaner mobility. Barcelona Mayor also said that the city is working within the frame of the Agenda 2030 and the SDGs as a roadmap: “We need to translate this big roadmap into realities for all citizens”.

From her side,Tunis Mayor, Mrs. Souad Abderrahim also emphasized: “Good governance means the one that listens to citizens that takes care of the environment and engage people in the municipality actions”. She remarked the importance of working on common objectives.

Mr. Tunç Soyer, Mayor of Izmir (MedCities member) also underlined the need of working together with cities from both shores as they all are facing the same challenges, even more with the current COVID19 situation. Mr. Soyer said that for a city as Izmir, being part of Mediterranean networks allows the city and its citizens to have a common space for important exchanges, discussions and learning processes. “We all need to preserve diversity and biodiversity as is tone of the most important issues we are facing. Also, migration, marginalisation and segergation are big matters that can be addressed taking into account this diversity in society”.

For MedCities it was a pleasure to be present and to listen to some of our two engaged city members and also other representatives from the Mediterranean basin as Agustí Fernández de Losada, Global Cities Programme Director, CIDOB (Barcelona Centre for International Affairs), Paolo Magri, Executive Vice President, ISPI (Institute for International Political Studies) and Yousef Shawarbeh, Mayor of Amman.

In 1995, the ambitious initiative brought together representatives of countries from both shores of the Mediterranean – including those with long-standing tensions between them – in Barcelona, to form a partnership across a comprehensive range of issues based on cooperation, solidarity and peace. In 2008, the partnership was further consolidated with the founding of the Union for the Mediterranean (UfM). Based in Barcelona, the UfM Secretariat became the first permanent structure dedicated to the intergovernmental Mediterranean partnership.

Over two decades after its launch, the Euro-Mediterranean Partnership is commonly viewed as having failed to meet the ambitious objectives enshrined in its founding Barcelona Declaration. While multilateral processes continue, the region is far from becoming a space of comprehensive cooperation, solidarity and stability. Instead, there is a growing trend towards bilateralism and unilateralism, as well as a rise in geopolitical competition between regional and global powers.

With more than half the Mediterranean’s population living in urban areas and with the Southern countries experiencing rapid urbanisation, cities play a central role in the formulation of solutions to the region’s challenges. For decades cities from the North and South have exchanged experiences and knowledge in decentralised cooperation networks and other partnerships. Cities on both shores of the Mediterranean have pioneered innovative public policies in all these areas that greatly contribute to the region’s sustainability and resilience. To effectively tackle twenty-first century challenges, it is not enough for the Euro-Mediterranean Partnership needs to acknowledge the centrality of urbanisation dynamics. It also needs to grant cities a greater role in its decision making. As the 2030 Agenda makes clear, the transition to sustainable development can only be achieved through multi-level governance mechanisms that actively engage local authorities and actors.

You can watch the session here.