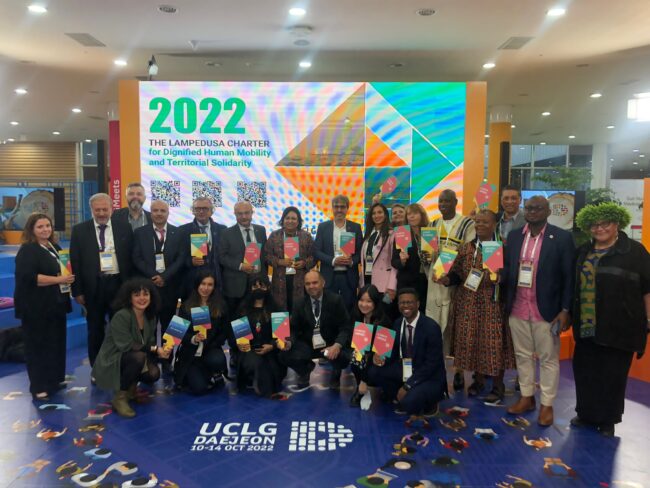 MedCities participated at the United Cities and Local Governments (UCLG) World Summit of Local and Regional Leaders congress, this year held in Daejeon. This is the largest gathering of mayors, presidents of associations, councilors, and local and regional practitioners from around the world that UCLG celebrates every 3 years.

The Congress also builds on the legacy of the commitments of the local and regional governments constituency around the world. It constitutes an opportunity for MedCities to express the Mediterranean city’s needs and challenges. Also, for the association, it is a great moment to meet and exchange with other partners, and with some of the Mediterranean city members and representatives.

The Secretary-General, Mr. Josep Canals-Molina participated in several sessions. In the first one, he attended the Lampedusa Charter Meeting, together with representatives from several countries, and accompanied by Totò Martello, former Lampedusa Mayor, who promoted the charter and who said: “The Lampedusa Charter, is a point of no return in the long path to building a better global society. If a person is at sea and needs help they must be rescued regardless of the why, the color of their skin their status” .

The Lampedusa Charter has been adopted by the UCLG World Council. It upholds dignity, care, human rights, universality, participation & diversity as the solid foundation on which our paths towards more equitable cities for all, regardless of their administrative status.

During the session, Mr. Canals could read a paragraph of the Lampedusa Charter: “Through our action on the ground and our global defense of human rights, our commitment is to address human mobility by including all people as neighbors, reshaping the notion of citizenship on the grounds of belonging and placemaking within our communities and not as an administrative status”.

Mr. Canals also shared a common vision with the rest of the panelists and city members: “Nobody wants to leave home, but when they arrive in new cities, we need to solve the problems they face even if we don’t have the resources or competencies. And he added: “Municipalities need firm commitments to work on migration issues. Local administrations don’t have competencies and it is the States that must legislate and help them to deal with it“.

MedCities is committed to spreading the entire content with city members and with the Parliamentary Assembly of the Mediterranean.

Also, MedCities Secretary-General could share the stage and impressions with city members such as Sfax, Nabeul, Sousse, and Barcelona Metropolitan Area (AMB) and talk about the future of some migration projects we work on with the International Centre for Migration Policy Development (ICMPD) – urban_migration (MC2CM) program or the migration component of A’SIMA Tunis project.

We had the opportunity to attend the conference given by Mrs. Souad Abderrahim, Mayor of Tunis (MedCities member) at the UCLG General Assembly. And we congratulate the city of Mersin which was nominated for the UCLG Peace Prize finally won by the city of Palmira.