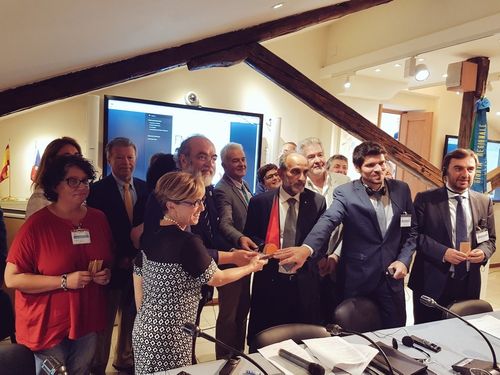 2017 Annual General Assembly of the Intermediterranean Commission of the CPRM

MedCities strengthens its relationship with ICM of CPRM to build common projects on shared challenges for Mediterranean cities and regions.

The Annual General Assembly of the Intermediterranean Commission (IMC) of the Conference of Peripheral Maritime Regions (CPMR), was hold in Naples, Italy, on 6-7 July. A political declaration was released addressing all the main current challenges and including specific recommendations, outlining their key political priorities, including the need for a coordinated strategy to deal with the deepening migration crisis, the importance of a reformed Europe built on solidarity and cohesion, and the necessity for multilevel Mediterranean cooperation.

MedCities strengthens its relationship with ICM of CPRM in order to build common projects on shared challenges for Mediterranean cities and regions, based on the collaboration agreement signed previous year, which already continue generating results through the participation of both networks in the Horizontal Interreg MED projects PANACeA y BLEUTOURMED.

Furthermore, during the meeting the Intermediterranean Commission (IMC) and MedCities argued about how to impulse the role of Mediterranean cities and regions on the European Neighbourhood Policy, in order to archive common goals to impulse a Mediterranean Sustainable Territories Agenda.

The IMC member regions are calling for a reinforced and reinvigorated EU post-2020 Cohesion Policy. The future Cohesion Policy should cover all regions, addressing the growing social, economic, environmental and territorial disparities, and counterbalancing the negative impacts of the Single Market. It shall also foresee a single set of rules for all European Structural and Investment (ESI) Funds.