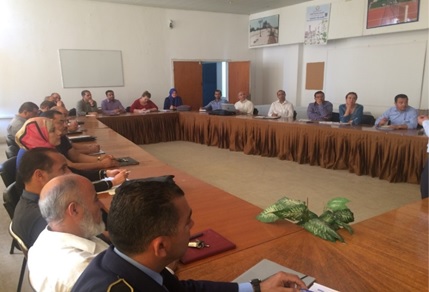 Due to the climate change and the urbanization process, and also the increasing population growth rates, which are transforming the shape and challengies of the urban areas wordwide. Mediterranean cities are becoming more and more vulnerable and the risk of natural catastrophes more likely. In addition, urban growth of a big or small city is confronted with a high vulnerability. Everywhere, prevention and possible solutions to such risks are not evident yet and there is need for a reflection on the sustainability of the relationship between human beings and environment.

Monastir pilot project “Protection of the city of Monastir against natural catastrophes through an urban sustainable planning”, is included within the national plan for the development of an analysis and information system of urban risks conceived by the Ministry of Public Works, Environment and Territorial Planning.

This project aims to the creation of a prevention system of natural risks that threaten the city of Monastir and the implementation of geographical information system allowing an urban sustainable planning.

The project is financed by the European Union in partnership with the Monastir Municipality, the UN University and the ABG.

The main objectives of the project can be summarized in:

This project is based upon the use of new technologies of tele-detection (from different satellite images from different dates and resolutions for collection of certain data thus allowing the retrospective analysis of the urban space. It is also based upon a participative approach with the different stakeholders of the city (public establishments, associations, researchers and universities…). It allows the city of Monastir to study the different natural risks threatening.

This project will permit the implementation of a geographical information system aimed to a rational urban planning and thus helping to a sustainable development of our city.