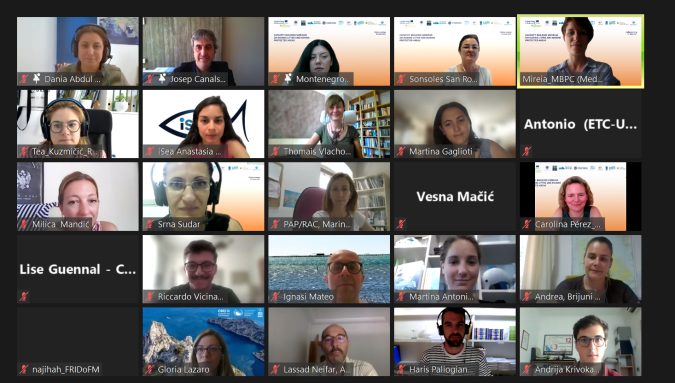 Towards better management and prevention measures against marine litter in Montenegro

MedCities, throught its Secretary General and as part of the Interreg Mediterranean Biodiversity Protection Community and its Working Group 1 on Biodiversity protection and transboundary challenges, has been involved in the second capacity building workshop on the topic of marine litter and marine protected areas, with a focus on Montenegro.

The workshop explored methods, data and tools to deal with this crucial contemporary issue, elaborated by a series of ongoing projects which are part of the community.

Two projects focused on monitoring and data collection of marine litter in Montenegro and in the Adriatic-Ionian region were presented during the first session:

·         DeFishGear , implemented within the framework of the IPA Adriatic Cross-border Cooperation Programme and addressing the need for accurate, coherent, and comparable scientific data on marine litter in the Adriatic-Ionian macroregion.

·         GEF Adriatic, on the Implementation of an Ecosystem Approach in the Adriatic Sea through Marine Spatial Planning and funded by the GEF International Water and Biodiversity focal areas (GEF 6 Strategy).

Both projects are gathering data about the quantity, the typology of items and materials, and the areas, with particular attention to MPAs, in order to provide evidence-based instructions and suggestions to other projects and public institutions.

uccessively, the workshop provided an overview on the MBPC’s contribution on the marine litter topic, among the outputs, the web portal « MedBioLitter » is gathering data on the interaction between marine litter and biodiversity in the Mediterranean. In addition, the catalogue of existing tools for public authorities will be updated soon.

To close the first session, the project PlasticBusters MPAs was presented a range of its multiple actions, the projects conducted 4 case studies on the effects of marine litter on biota, specifically in the Tuscan Archipelago, in the National Marine Park of Zakynthos, in the Cabrera Archipelago National Maritime Park and in the Pelagos Sanctuary. During the next months, PlasticBusters MPAs will also produce capacity building tools on MPAs management.

The second session firstly introduced the ACT4LITTER project, which elaborated specific tools for public authorities of the Mediterranean countries to concretely tackle the marine litter problem including an inventory of marine litter measures and a decision-making tool for prioritizing such measures according to each territory’s needs. The discussion highlighted that a wise use of plastics throughout circular economy, and an attentive monitoring of the most polluting sources such as shipping, fisheries, tourism, discharged of untreated municipal sewage and industrial outfalls are the first action to undertake in this respect.

uccessively the experience of Ebro Delta Nature Park and the Thermaikos Gulf Protected Areas in Greece to combat marine litter were presented as concrete local experiences: the first one focused on raising awareness and implying civil society for the replacement of single-use plastics and a cleanup campaign and removal action, while the second one mainly addressed the fishing sector (derelict fishing, fisheries and aquaculture) as the main local source of marine litter.  Monitoring, prevention and capacity building for local stakeholders were the main actions taken in this sense. Finally, coming back to the Adriatic Sea, a project to make Croatian Islands plastic free was introduced by a SUNCE representative.

The conclusions drawn up by Josep Canals, Secretary General of MedCities and Dania Abdul Malak from the ETC-UMA, highlighting both the very good work done so far, and the need to further improve these actions particularly in terms of dissemination.

Here some links to get more information on the workshop: