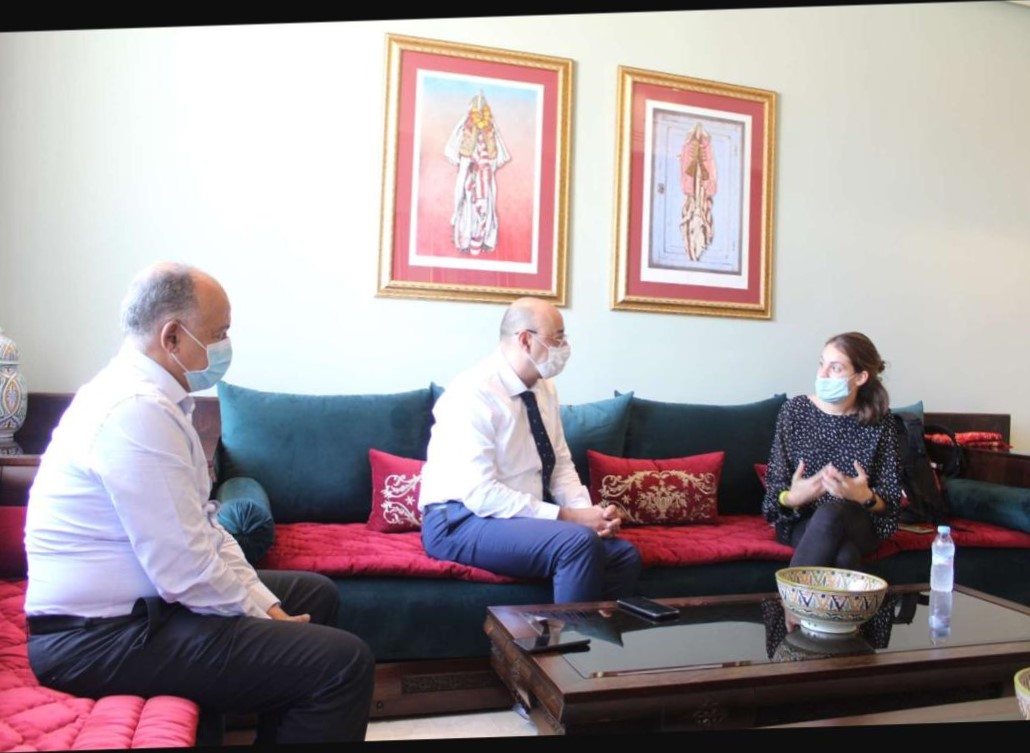 Between the 10th and 13th October 2021 the General Secretariat of MedCities visited the cities of Tanger, Tetuan and Chefchaouen to ensure the continuity of the good collaboration within the network

The Secretary General of MedCities, Mr Josep Canals, visited Tetuan the 10th October and met with the newly appointed Mayor of the city, Mr Mustapha El Bakkouri, and Mr Yassir Ghailan, Head of the Foreign Relations and Cooperation Service. They discussed passed and new opportunities for collaboration and the mayor renewed the municipality’s willing to pursue its active and fruitful participation in the network activities and projects.

Later in the morning, the technical teams of MedCities and the municipality met to agree on the work plan for the COHESIMED II project, which will have a duration until December 2021 and give continuity to the main priority actions identified during COHESIMED I in regards to the needs of women in the neighbourhood of Nassim (Nakatta) and the solutions proposed from an urban design and architectural point of view. A series of workshops and street art activities will be organised with the community, while a technical study will be done focused on a specific area of the neighbourhood.

On Tuesday 12th October MedCities’ project officer, Laia Vinyes, visited Tanger to meet with the team in charge of piloting TangerAccueil, focused on setting up an information point for migrants and offering them a training program to be held in the coming weeks. A first meeting was held with Mr Juan Melenchón, the expert supporting the project based in Tanger, and later on with the municipality’s team behind the project, including Mr Mostapha Zian, Head of the Foreign Relations and Cooperation Service of the City Council, Mr Laamiri Abdelghani, Head of Social, Cultural, Sports and Civil Society Relations Department and Mr Mohammed Mchichou, Head of the Social, Cultural, Sports and Civil Society Relations’ Division. TangerAccueil enters a crucial phase in its implementation where both the information point and the training will be put in place through a pilot phase up until December 2021.

The visit to Tanger concluded with a brief but very rich exchange with the newly appointed Mayor of the city, Mr Mounir Lymouri, together with Mr Badraoui, Secretary General of Tangier City Council, and Mr Zian. The main mission and activities of MedCities were briefly presented to the Mayor, who expressed his willingness to pursue the collaboration with MedCities in general and precisely in the frame of the TangerAccueil project.

There was no time for more as at 4.30 PM it was the turn to meet the technical team of the Chefchaouen city council in charge of international relations and visit the outstanding results of the REFGOLMED project, funded by the Catalan Agency for Development Cooperation and closed successfully last May 2021. The Eco Center of Chefchaouen was the scenario of the visit to the installation of photovoltaic panels and a first meeting with some members of the local cooperative, CODIBER, beneficiary of the project, hosted by Mr El Bakali, head of the International Relations Service of Chefchaouen City Council, and Mme Dalila Harras, consultant and key contributor to the project success. An interesting meeting was held a bit later with the newly appointed first vice-mayors of the Chefchaouen city council, Mme Kouzi Atimade, and the third vice-mayor in charge of the collaboration with MedCities, Mme Hanane Afassi Idrissi. The main results and activities of the REFGOLMED project were discussed with the two vice-mayors and the new project, EmploiMED, funded by ACCD aswell, was presented to the whole team on wednesday morning with the intervention of project officer in charge, Noe Viedma, online.

Overall, this mission has been fruitful to renew and strengthen ties with MedCities’ members in Morocco, and to identify future and upcoming opportunities for collaboration. The COVID pandemis is finally allowing for some physical gatherings and this is only going to contribute to a stronger and more cohesioned network.