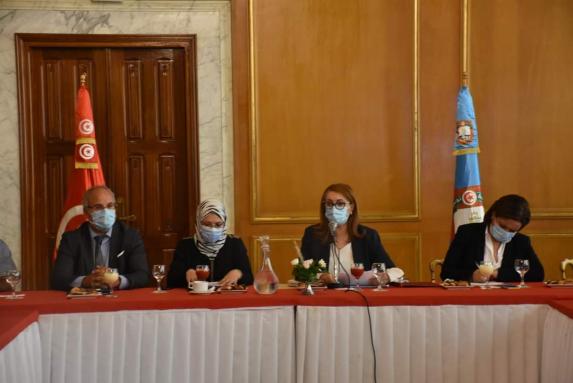 In the frame of the A’SIMA Tunis project, in July 2021, the team of experts involved in the City Development Strategy of Tunis (CDST), submitted their sectoral diagnostic reports as well as a transversal analysis of the major Facts and Challenges faced by the city of Tunis and its de facto metropolitan space.

Last 10th September the political and technical staff of the Municipality of Tunis in charge of the City Development Strategy of Tunis (CDST) reviewed the reports and approved their content, which was submitted for approval to the Steering Committee of the CDST.

The Steering Committee is the participatory organ in charge of the political overview of the process and the approval of its results. Comprised by more than 20 institutions it includes all major socio-economic actors of the city as well as civil society representatives. The second meeting of the Committee, celebrated at the end of September, had two main objectives: the detailed review of the produced sectorial and transversal diagnosis and debate on their content; an introduction to the Steering Committee’s Charter, describing the political role, as well the concrete functions and organisational aspects of the committee. The SCM is also responsible for the approval ofthe official presentation of the diagnosis results to the city’s civil society, in the 2nd Strategic conference of the A’SIMA Tunis project to be held on the 26th October.

Furthermore, during this month of September other important event took place: the first Metropolitan Table of the CDST. The meeting gathered representatives of some of the 38 municipalities of the Grand Tunis. The event was meant to present the process of elaboration of the strategic plan of Tunis, discuss the findings of the diagnosis regarding the metropolitan aspects, both in terms of the potential for sustainable development role as well as regarding governance issues, and discuss the active participation of such municipalities in the process. The meeting was presided by the Mayor of Tunis Mrs. Souad Ben Abderrahim and counted with the participation of 12 municipal representatives, of which 9 mayors (Municipalities of Khlédia, Hammam-Chott, Fouchana, Naasen, Mornag, Kram, Jedaida, Ben Arous, M’hammdia, Rades, Megrine et Bassatine). An upcoming event was also introduced: a training on metropolitan governance, which will take place on October 11, 12 and 13, organised by A’SIMA Tunis project.