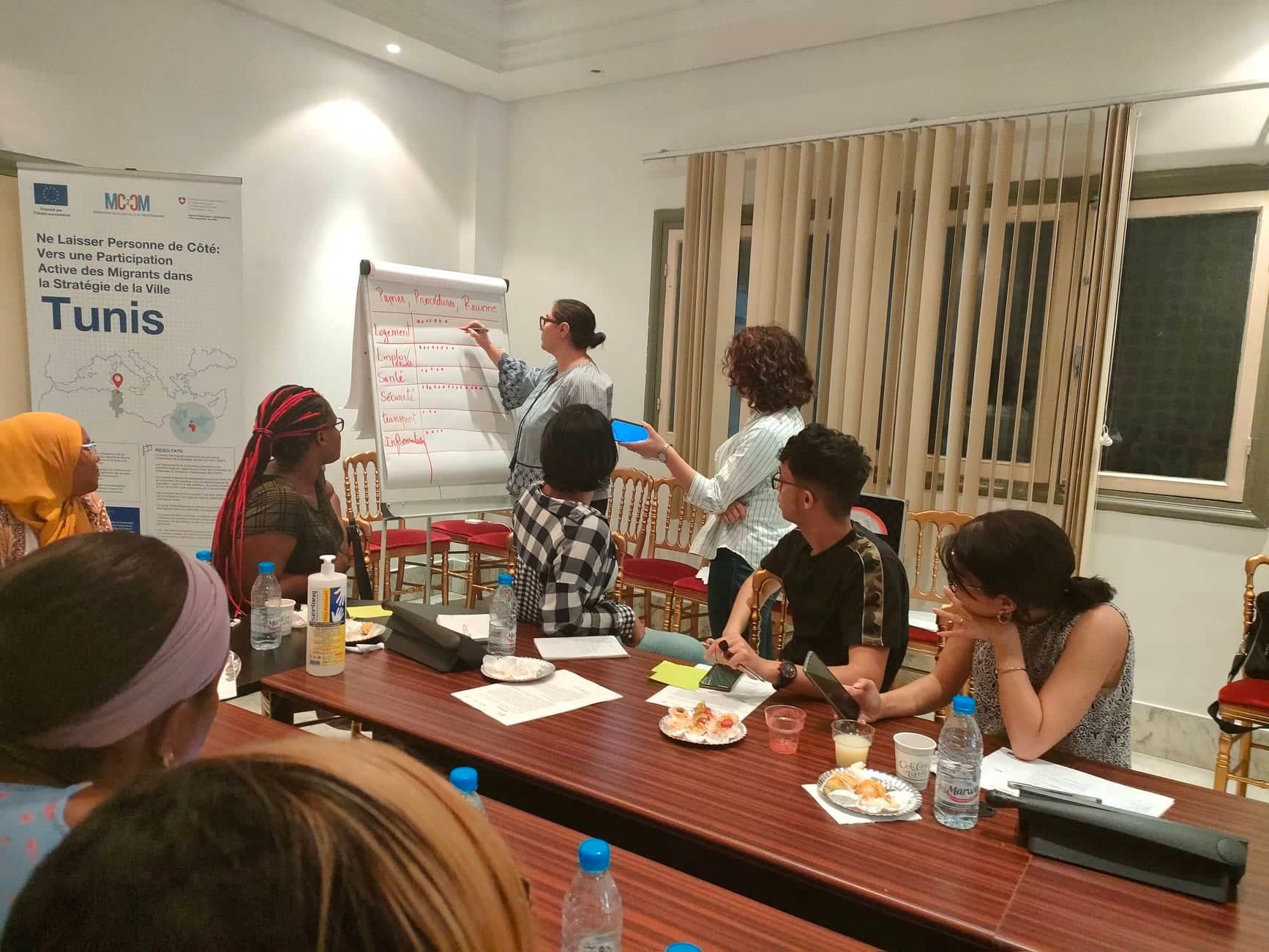 Migration and local planning project arrives at its end

On Juny 30th was the last day for the implementation of the project “Leave no one behind: towards an active participation of migrant in Tunis City Development Strategy”, which is part of the ICMPD program “Mediterranean City-to-City Migration MC2CM” financed by the EU and the Swiss Development Cooperation fund. The project was launched in March 2023 in order to enhance the participation of migrants and migration-related CSOs in the definition of strategic priorities and future projects in the frame of the City Development Strategy of Tunis (CDST) and to reinforce the capacity for inclusive urban planning in Tunisia.

The project supported the implementation of the CDS citizen participation campaign in order to actively target the migrant population. After thoroughly mapping CSOs and migrant communities in Tunis, three focus group meetings were organised on the 9th and 10th of June in the Municipality of Tunis, targeting migrant students; migrant support CSOs and resource people representing vulnerable groups of migrants, namely informal workers. The meetings had a two-fold objective:

b) collect their inputs, especially regarding the priorities of migrants and their concerns in order to inform future strategic projects.

A citizen participation campaign was launched with several communication tools. A bilingual website and social network profiles were put in place in order to inform on the CDS elaboration process and an informative leaflet, posters, roll-ups, and banners were printed and distributed.

The campaign included a strong presence on the ground since three mobile stands were in different locations of the city of Tunis, including the areas of affluence of migrants, where a team of facilitators, guided by the CDS experts, accompanied the citizens in filling in the bilingual surveys. For a more detailed view of the campaign, you can follow the Facebook profile of Tunis CDS. As a result of this process, some 74 migrants were directly targeted during the duration of the project, by filling in the survey. Also, their priorities have been considered, and the expert team is working on identifying a municipal project on migration inclusion by facilitating access to services and rights, equal access to public spaces, and social integration activities.

In parallel, the local migration expert who accompanied the Municipality of Tunis in this process has elaborated a practical guide (read it here, in French) on how to reinforce migrant participation in urban planning processes, in order to assure the inclusion of their concerns and priorities. An in-person training was organised for 30 representatives of more than 15 Tunisian municipalities on June 30th in an activity co-organised with the National Federation of Tunisian Cities, in the frame of the works of its network of Local Planning. The training was an opportunity to discuss the multiple realities of cities concerning migration and their impact on strategic planning.