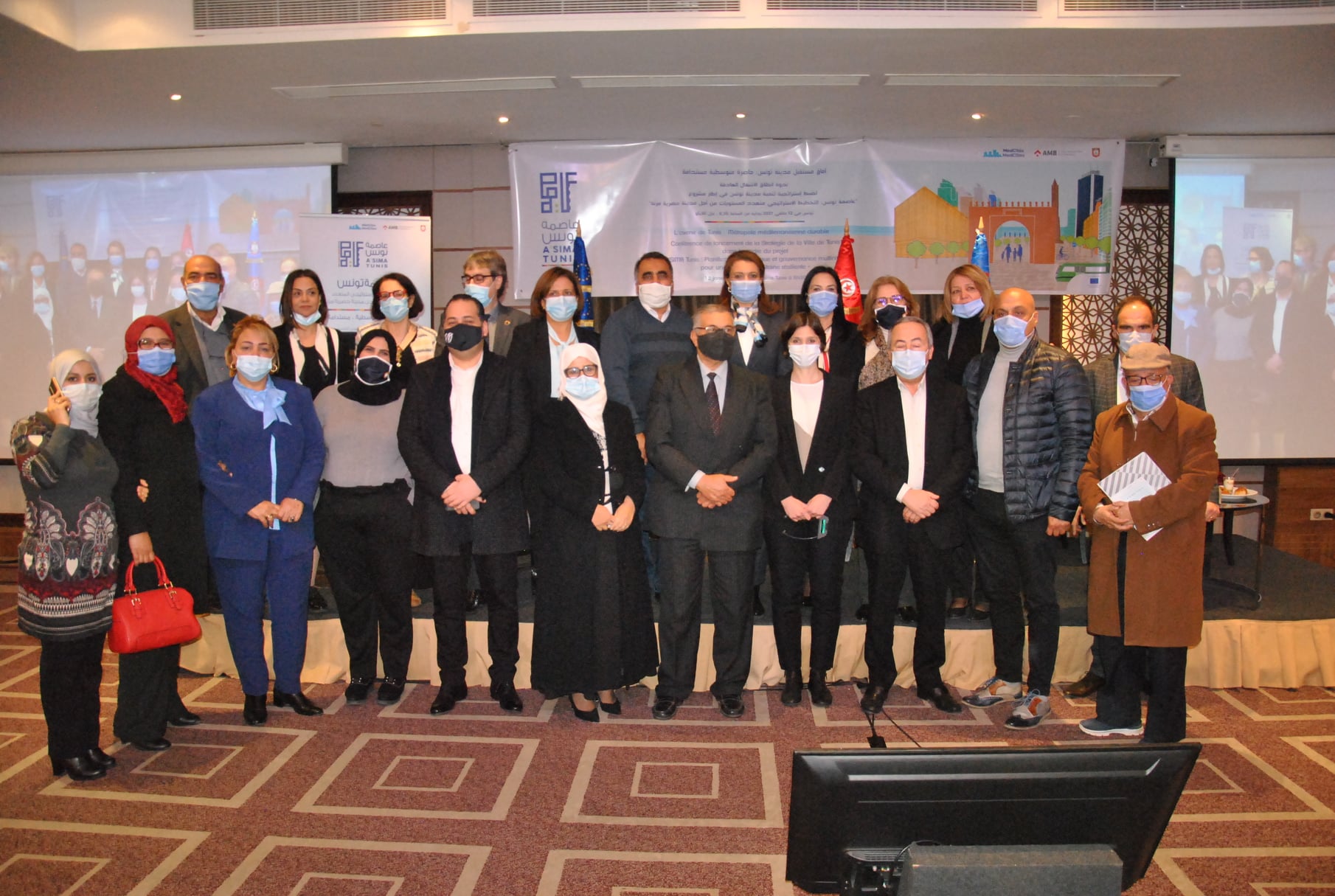 Launch of the City Development Strategy of Tunis: Towards a sustainable Mediterranean metropolis

The event was held within the framework of the project « A’SIMA Tunis: Strategic urban planning and multi-level governance for a resilient metropolitan city« , financed by the European Commission.

The project partners were able to meet face-to-face to inaugurate this important strategic planning process, which aims to develop the new City Development Strategy (CDS), in a metropolitan context. Altogether, 122 people attended the event in Tunis and 33 people joined through the livestream.

The intervention of the Mayor of Tunis, Ms. Souad Abderrahim, officially kicked-off the process of developing a Strategic Plan for the city of Tunis. This city strategy will be elaborated in a participatory manner, following the methodology that MedCities has tested in several Mediterranean cities. A CDS is a multisectoral development tool, which can be used to address all urban issues (economic, social, environmental, etc.), in concert with the city’s stakeholders. The Mayor of Tunis insisted on the participation of the various actors of the city to enrich this strategic plan: « The project is developing on a participatory basis. It is about laying the foundations for the future of the city of Tunis, it concerns us all and it requires the commitment of all partners: the public sector, the private sector and especially civil society. » The CDS of Tunis will be developed between 2021 and 2023.

The opening session also welcomed the interventions of Mr. Sacaze, of the EU delegation in Tunisia and Mr. Ernest Maragall, Vice-President of International Relations and Cooperation at the Metropolitan Area of ​​Barcelona (AMB), who reiterated the commitment of the AMB and the provision of all its expertise in strategic planning, as well as in waste management, which is crucial for the second phase of the A’SIMA Tunis project. In addition, Mr. Canals, MedCities’ Secretary General, underlined the importance of this historic process which aims to improve the lives of all citizens: « This CDS will be a benchmark in Tunisia and in the region. It is about implementing the SDGs at a concrete and tangible level. The link between the city strategy and the SDGs is one of the differentiating elements of this process, which begins today ».  In addition, Mr. Mondher Bouasnina, President of the Supporting Authority for the Decentralization Process of the Ministry of Local Affairs (MALE) expressed the MALE’s support and commitment to this CDS process.

Following these institutional declarations, the A’SIMA Tunis project was presented in detail. Other actors from the private and non-governmental sector also intervened during a round table on the involvement of institutional partners and city actors; the company Albuhaira Invest, which operates in the North Lake of Tunis, the company for South-Tunis (SEPTS) presented the projet « Tunis Marine », and the National Federation of Tunisian Municipalities (FNCT). These actors presented their projects for the future of the city and confirmed their commitment to this process of collective reflection.

The CDS Tunis’ inaugural events were an important moment for the three project partners, MedCities, the Municipality of Tunis and the Barcelona Metropolitan Area (AMB), to confirm the political and technical commitment of a large number of actors in the city and the country on this transformative project. The inauguration of the CDS was followed by a technical workshop on the challenges of strategic urban planning in Tunis. The president of the municipal commission in charge of the CDS Tunis, M.Khaled Lazâar, presented the opportunities for the city of Tunis as well as the challenges implied in this process. Furthermore, M. Rachid Taleb made a fairly complete diagnosis of the challenges related to metropolitan territorial governance, an innovative concept in Tunisia. The technical workshop made it possible to go into further detail on the methodological aspect of the development of the CDS and also to understand the experience of the city of Sousse, which developed its City Strategy during the period 2012-2014. The technical workshop ended with a round table on the synergies of the A’SIMA Tunis project with other donors and technical partners in Tunisia, in which representatives of USAID, UNDP and Cities Alliance took part.

The City Development Strategy of Tunis was officially launched on January 12, 2021, at the Hotel Laico in Tunis.

For more information on the A’SIMA Tunis project, please download the projects’ brochure .

The video of the event is available here.