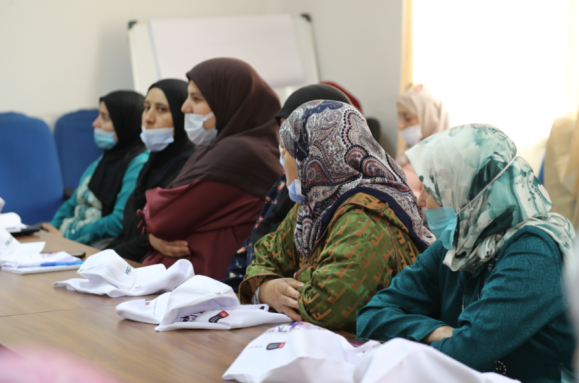 Gender perspective into the urban analysis in Tetuan

After defining the pilot area, the participatory diagnosis kicked off with a number of workshops and exploratory walks in the neighbourhood with over 40 women involved.

The month of June has been key for the implementation of the COHESIMED project in Tetuan. The project, funded by the City Council of Barcelona, aims at improving the well-being of women in the city of Tetouan (Morocco), and specifically in the district of Nakatta (Nassim is its official name), through the improvement of the accessibility and safety of the public space for women, focusing on their day to day mouvements and trips.

Back in May, the partners of the project decided to focus the action in the neighbourhood of Nakatta, an out-skirts’ area of the city of Tetuan with great needs and certain community-based networks on which the project could ground its action. MedCities and the city council of Tetuan are strongly supported by the expert teams of Col.lectiu Punt 6 – a cooperative based in Barcelona with a long experience working on the gender perspective analysis in urbanism and architecture – and Acetre Consulting – a long-standing consultancy firm with presence in Spain and Morocco.

After defining the pilot area, the participatory diagnosis kicked off with a number of workshops and exploratory walks in the neighbourhood with over 40 women involved. The 16 June, 21 adult women gathered at the Community Center of Al Boughaz and were told about the objectives of the project. A video-animation was used to ease the understanding and break the ice. Their 46 children were taken care of by two facilitators in an annex room, something which facilitated and mobilised even more the women to attend the workshop !

The next day, 22 women, of which 8 were teenagers, gathered at the Center in the morning and later on marched around the neighbourhood to identify « in situ » the problems and difficulties they encounter when moving around or accessing the area on a daily basis. The results of the exploratory march were shared and discussed back at the Center Al Boughaz, and were signaled on different printed maps of the neighbourhood. Finally, on Friday 18, 15 adult women participated at a second exploratory march and later on gathered at the Center to conclude the process, together with their 37 children.

The main issues observed by the women concern the quotidian and daily uses of the streets, buildings and urban spaces and point to the lack of public lighting that generates insecurity or the dense traffic and unsafety for women as they mainly move around the neighbourhood on foot. Accessibility is a generalised problem around the area, together with lack of comfortable and safe passages to the main neighbourhood services like schools or health centers.

A comprehensive diagnosis and map will be produced in the coming weeks by Col.lectiu Punt 6, to be later on discussed with the city council of Tetuan to identify priority actions and measures, as one of the main contributions of COHESIMED in Tetuan.