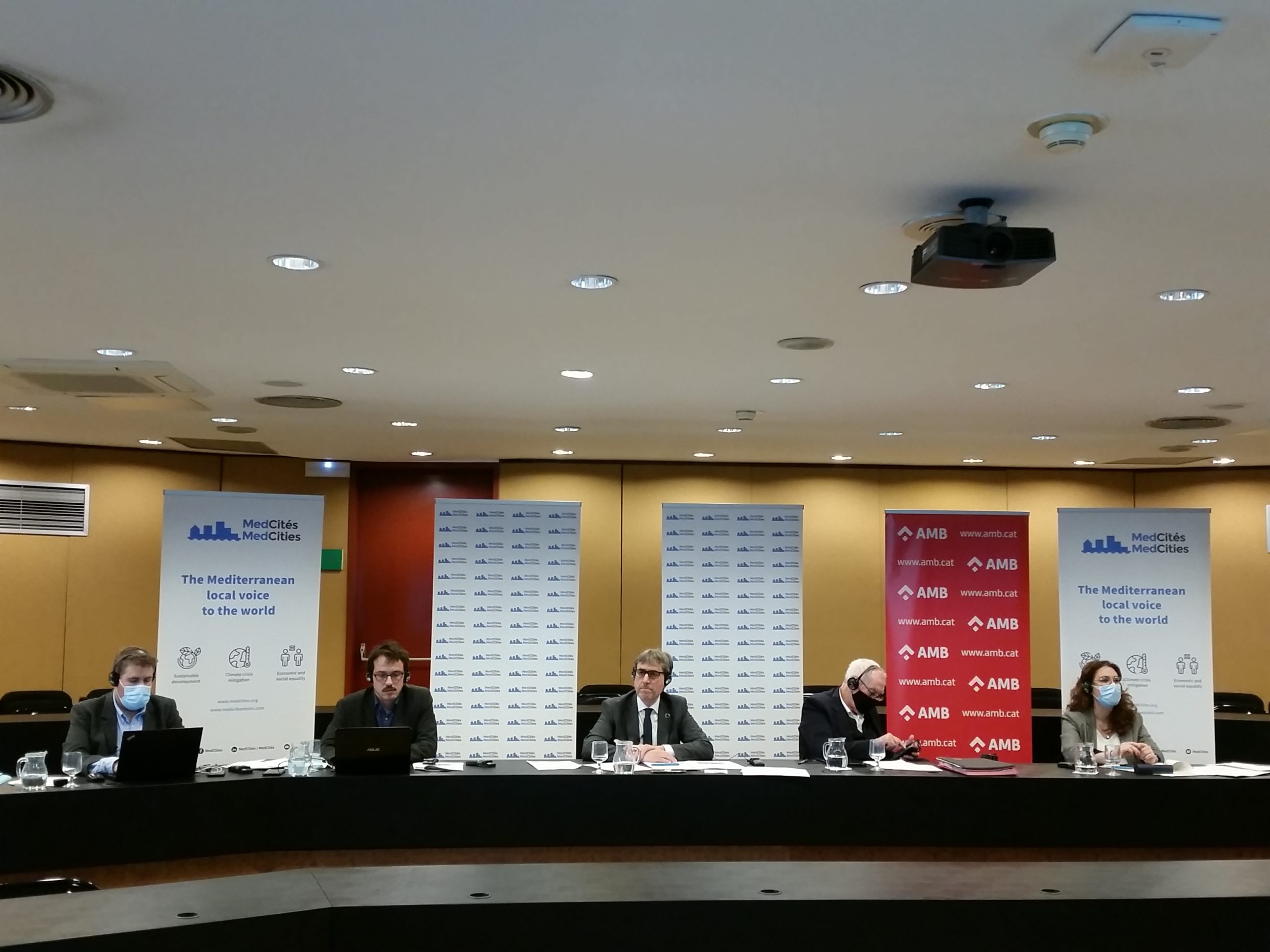 On December 3rd 2020, MedCities organized its first-ever online General Assembly. Despite the technical challenges of an online format, the MedCities General Assembly 2020 was a success. Two new cities were accepted and the network counts now with 63 members.

Every year, Mayors, Deputy Mayors and other members of the MedCities’ network meet at the General Assembly to discuss the associations’ work and share their demands through this Mediterranean cooperation platform. On December 3rd 2020, MedCities organized its first-ever online General Assembly. Despite the technical challenges of an online format, the MedCities General Assembly 2020 was a success, over 70 people attended the online event, with high representatives from 30 cities which were able to interact in a very constructive way. This years’ assembly also gave the opportunity to welcome two Jordanian cities: Irbid and Madaba joining the network.

The Barcelona Metropolitan Area (AMB) and the City Council of Barcelona, hosted the General Assembly in the plenary room of the AMB, while most of the audience attended via Zoom. Mr. Mohammed Idaomar, President of MedCities and Mayor of Tetuan chaired and inaugurated the meeting. Mr. Josep Canals Molina, Secretary General of MedCities then introduced the developments that took place in MedCities this last year. He highlighted that 2020 was a key transition year for the association in terms of growth and adaptation both in a qualitative and quantitative manner. Next years’ budget duplicates that of 2019, and the organization is now well prepared for its next steps; in terms of professional staff or administrative and financial procedures, among others. Mr. Canals also highlighted that the organization is developing its Strategic Plan with a vision to 2030, involving all member cities in its elaboration. Throughout 2020, MedCities has been implementing 15 projects and technical assistances -involving 24 cities– on the topics of strategic urban planning, sustainable urban services, environment and biodiversity protection as well as social and economic development. Mr. Oriol Barba, Director of MedCities, presented some of the flagship projects MedCities has been implementing in 2020 such as the A’SIMA Tunis project , the coastal protection strategies project, the Urban Transports project and the Mediterranean Biodiversity Protection Community of the InterregMed program, among many others. Mr. Barba underlined the fact that the association has been very active in engaging members in upcoming financing schemes and projects for the next years, particularly on the topics of climate change adaptation or socio-economic recovery in post-covid19 contexts.

On that matter, Mrs. Laura Perez, Deputy Mayor of Barcelona, pointed out that «the pandemic has shown that cities are at the forefront of the response in times of crisis». After presenting the 2020 activity report, several member cities took the floor to express their interests. First, Mr. Ernest Maragall, Vice-President of the AMB and MedCities Secretary praised the work that was carried out this year and reiterated the institutional and financial commitment of the Barcelona Metropolitan Area (AMB) with all of MedCities members. He emphasized that, throughout its activities, the network shows that cities are capable of delivering a lot to its communities: «This is the moment for our cities to make our voices heard, let’s be ambitious and keep showing that we are capable of a lot». Furthermore, there were cities that expressed their willingness to work more closely with the network towards achieving the Sustainable Development Goals. For instance, some expressed a demand to work on projects against flooding and erosion of its shores as a priority to mitigate climate change impact. Others also expressed its concerns related to bio-diversity protection and the fight against pollution and the reduction of CO2 emissions in the Mediterranean Sea and the need of cooperation on environmental protection projects, including solid waste management.

The assembly then proceeded to a review of its finances of the years 2019, 2020 and 2021 and a presentation of the Action Plan 2021 and the 2020 Activity Report were approved by the executive committee. Importantly, this General Assembly gave the opportunity to present the state of the art concerning MedCities’ strategic plan 2021-2030. Last but not least, the Jordanian cities of Municipality of Greater Irbid (the second largest city of Jordan) and Municipality of Greater Madaba introduced themselves to the network. They also shared their main concerns and challenges and showed willingness to approach these through decentralized cooperation. The members present at the General Assembly and the General Secretariat gave a warm welcome to the two new members. With these incorporations, MedCities is now a network of 63 cities gathering all shores of the Mediterranean. On this 25th anniversary of the Barcelona process (1995-2020) MedCities members present at the General Assembly celebrated the growth and consolidation of the network and emphasized the relevance of having this space for decentralized cooperation and regional dialogue.