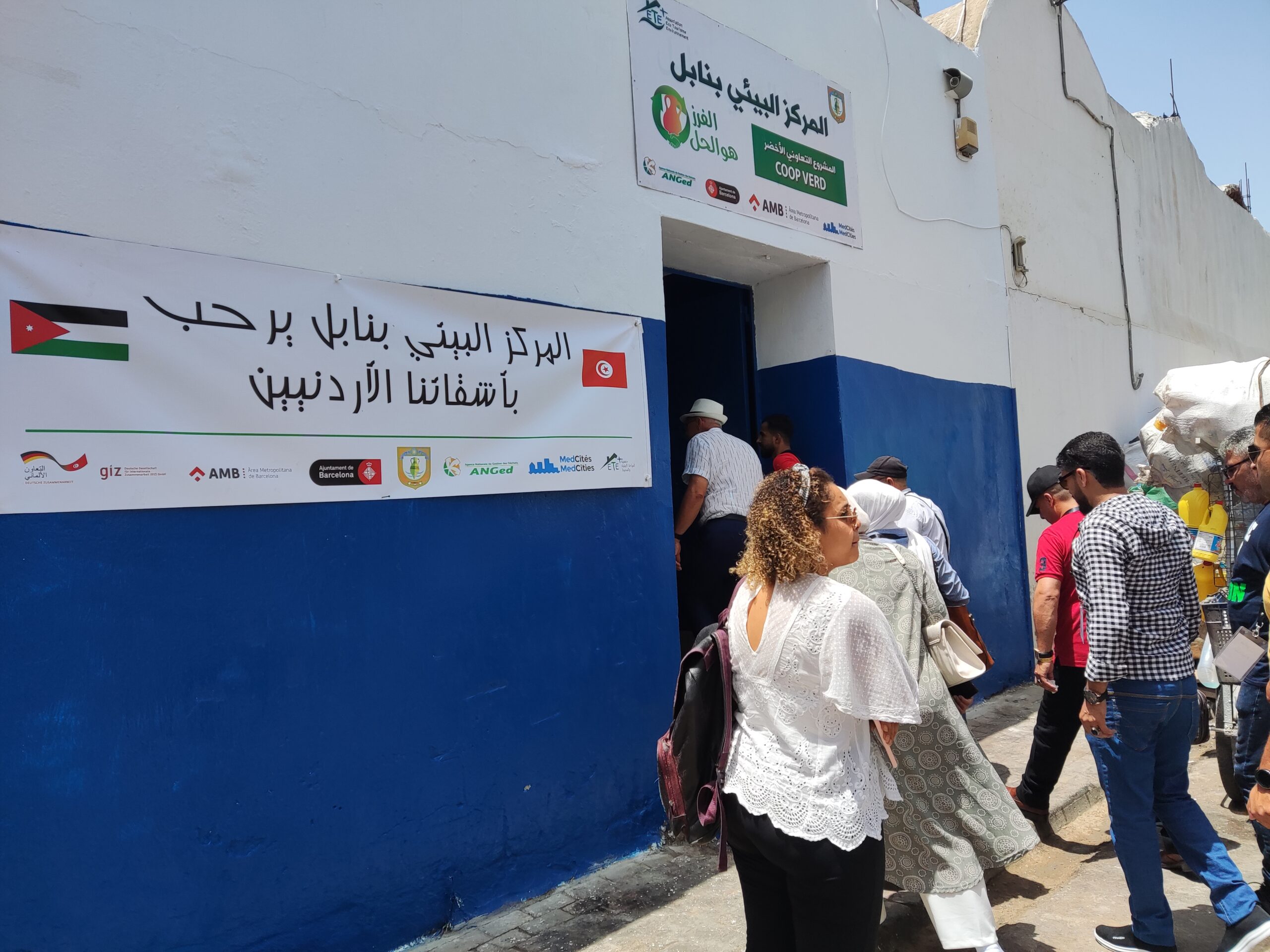 The delegation led by GiZ Jordan and comprised of more than 20 informal waste pickers – representatives of associations and cooperatives from the cities of Irbid, Madaba and Mafraq–  was received by the Mayor of Nabeul, Ms Besma Maatoug, municipal councilors and the responsibles of the plastic collection facility (Eco-Point) and the ETE+ Association. Organised with the support of MedCities, this exchange visit focused on the results of Coop-Verd, implemented in 2018 with funding from the Municipality of Barcelona.

After the initial presentation of Coop-Verd project and other initiatives implemented after its finalisation, a debate took place among the participants, on the waste management policy in Tunisia, the geographical area covered by the project, and the reasons for limiting the collection of plastic, bread and aluminum cans, the role of the Eco-Point in recycling and the recycling cages especially the selection of their location, size, maintenance and use by the citizens. Emphasis was given to the impact of the project on the 50 scavengers affiliated with the Eco-Point, the social assistance provided to scavengers (donations in kind and in cash during the holidays or the start of the school year or the COVID-19 confinement period, regular distribution of uniforms and protective equipment) and the participatory approach that the project follows.

Furthermore, the discussion on the implication of the civil society in the recycling initiative and the sensitization activities implemented such as environmental education in schools, awareness days on sorting at source and beach cleaning campaigns, creation of neighborhood committees, training of educators, and educational excursions for students and their families to natural sites.

The delegation then visited the Eco-Point where its Manager explained the day-to-day functioning and the work organisation, the quantities received, and the challenges faced. The Eco-Point was considered as a replicable experience for the Jordanian context. On the second day, the delegation visited other plastic or paper recycling facilities in the area in order to discuss with their managers.

The last day of the visit included a meeting among waste pickers from the two countries on their needs and challenges faced. Training on health and work security took place, as well as the presentation of several initiatives to support scavengers in Tunisia (micro-credit projects or similar). Then a discussion was organised which allowed them to identify several common points in their work but also the differences between each geographic context.