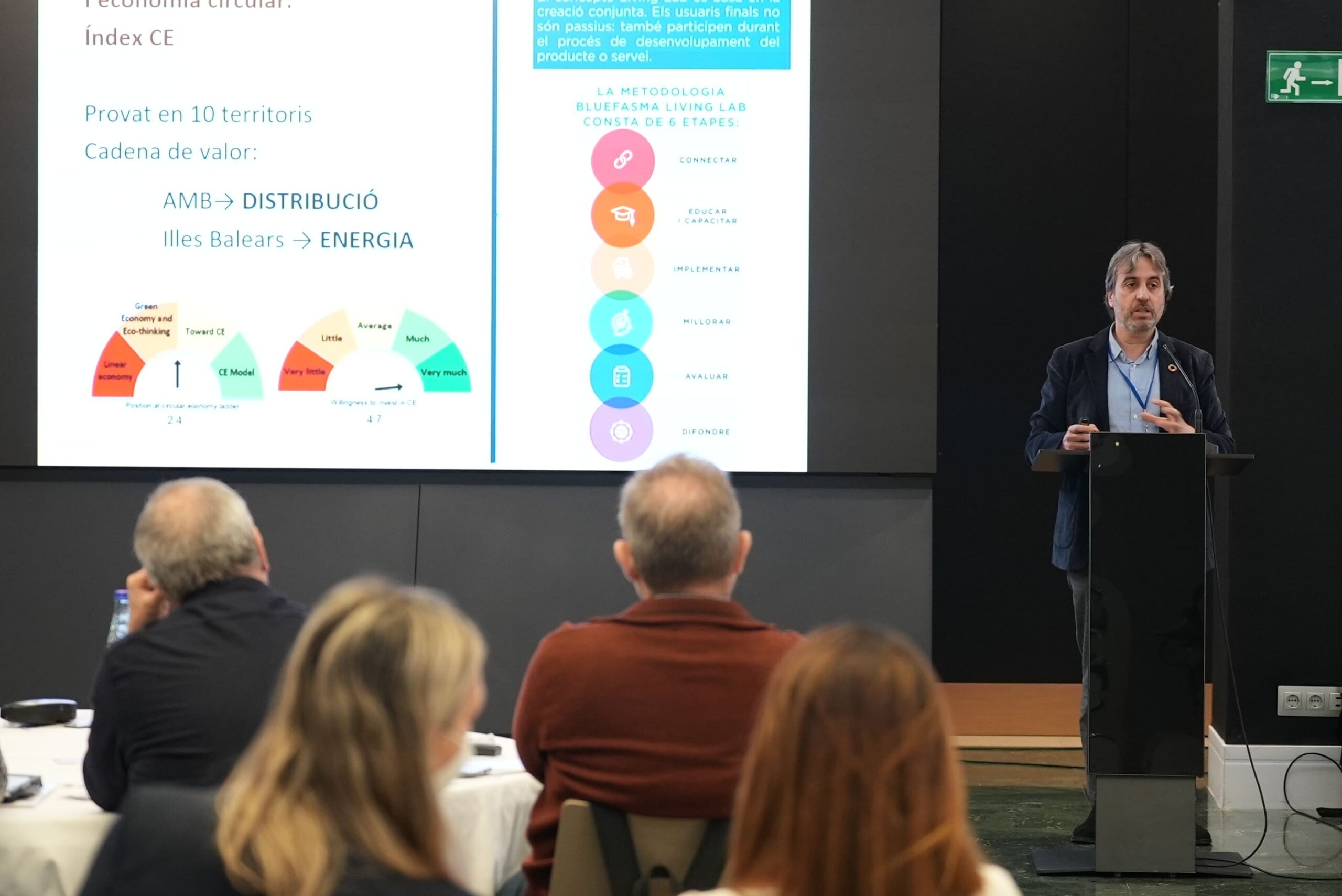 An initiative promoted by the INTERREG MED program of the European Commission, with the
collaboration of MedCities and the Maritime Cluster of the Balearic Islands

The BLUEfasma project, promoted by INTERREG MED of the European Commission as a financial partner, and with the collaboration of the Maritime Cluster of the Balearic Islands and MedCities in quality of partners, is on its way to promoting change in the fisheries and aquaculture sector to combat the depletion of natural resources. By promoting SME innovation, clusters, maritime networks, and protected areas, BLUEfasma seeks to drive the growth of the blue circular economy in the island and coastal areas of the Mediterranean.
This is a territorial cooperation project in which 9 Mediterranean countries are involved – Greece, Italy, France, Spain, Portugal, Cyprus, Malta, Croatia and Montenegro-, and which began in November 2019. Today was celebrated in Barcelona its national final event “Blue circular economy and innovation to the Mediterranean fisheries and aquaculture sectors”, to present the contributions made so far and complete them with the vision and opinions of the more than 80 participants who gathered during the event.
After this meeting, the BLUEFasma project is very close to its goal: to capitalize on all the work done during its lifetime to submit a report -next June- about Policy Recommendations for the implementation of the circular economy in fisheries and aquaculture in the Mediterranean.

Authorities and main partners representatives attended the opening session of the event. Among them, the Secretary General of MedCities, Mr. Josep Canals stated during the meeting: “We are late in environmental policies and we need actions to go faster. Cal Recall that the Mediterranean region is the second most affected by climate change, behind Antarctica, a biodiversity point that warms by 20% more than the planetary average, directly affecting pillars of the economy such as fishing and aquaculture”.
Canals also added: “From MedCities we share knowledge and experiences between member councils to positively impact civil society and speed up the process to achieve that the blue economy is sustainable. Projects such as Bluefasma are needed for recommendations policies to be incorporated into the new European directives, into the day-to-day management of administrations provide them with a legal framework, and ensure their implementation, because if the blue economy is not sustainable, there will be no possibility of a future“.

By her side, Ms. Iolanda Piedra, President of the Maritime Cluster of the Balearic Islands spoke about
the final report: “It is aimed at European and Mediterranean policymakers and stakeholders why not
we will achieve a circular economy, neither sustainability nor innovation, but we will share reflections that avoid the negative impacts they make from one sector to another, when we do maritime space planning, responsible and activate marine and maritime strategies that are fair, equitable and egalitarian”. She added: “The Small and Medium Entreprises and the self-employed pay their taxes directly, and in aid such as losses and funds Next Generation, they see them move on to big projects led by big companies. That’s why we claim to create a direct fund for them”.

Also Mr. Antoni Cañete, President of PIMEC, added: “Today we are concluding a whole series of works that thanks to the 10 countries where an approach is being taken on how to innovate and respond to the
situation within the blue economy. We are in a time of transition and a series of changes and decision-making that will mark, not only the present but the future. And to be able to do it with a concept of a circular economy in an area as important as that of the blue economy is absolutely transcendental”.

The afternoon session was also attended by Mr. José Luis Haro García, Manager of Emerging Local Economies of the Economic Development Agency of the Metropolitan Area of Barcelona (AMB), an active collaborator in the project. Haro stressed that the participation of the AMB in the BLUEfasma project is one of the key points of the holistic vision of cities: “Talking about a balanced city and its resilience is talking about a city that incorporates food as a key vector for building the cities of the future, as important as talking about infrastructure, land use planning or mobility”.

You can read here the main conclusions of the session

With the participation of more than 80 industry agents, BLUEfasma will capitalize on all the work done since it started in November 2019. A final report of recommendations will be presented next June policies for the implementation of the circular economy in fisheries and aquaculture of the Mediterranean.
The BLUEfasma Interreg Med Programme project, which has the involvement of 9 European countries, is working to combat the depletion of natural resources through the capacity for innovation of, above all, the small and medium enterprises without forgetting the maritime networks or Port Authorities for
to drive the development of the blue circular economy in island and coastal areas.