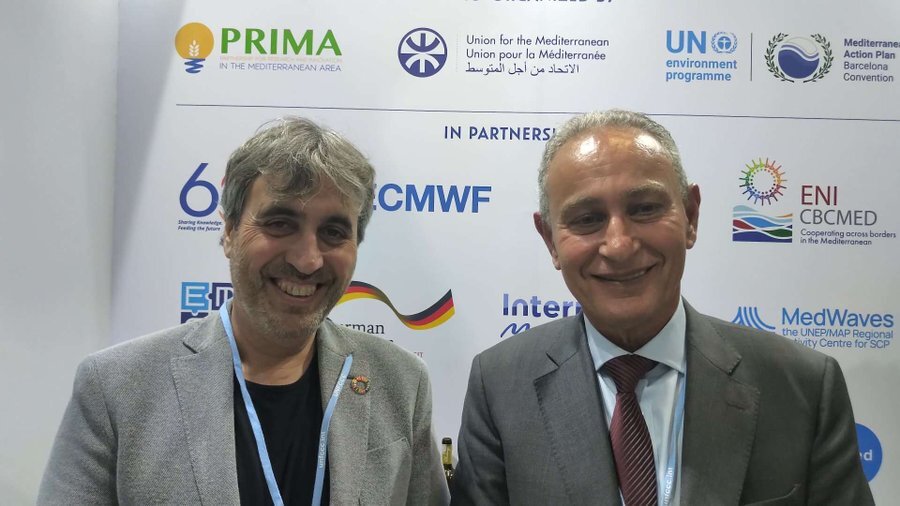 MedCities at the COP27; the local voice in the Mediterranean pavilion

The days were intense for MedCities in Sharm El Sheikh during the COP27 – and hot, probably with the highest temperatures due to the climate crisis -. The Secretary General of the entity, Josep Canals, was able to participate in three sessions within the Mediterranean Pavilion, promoted for the first time in a COP by the Union for the Mediterranean. Mr. Josep Canals could join in the round tables to talk about decarbonization at the IEMed session, about the climate crisis and adaptation of coastal cities at the Ocean & Climate Platform and Plan Bleu session, and about marine litter at the session promoted by the project of which MedCities is a part, the Mediterranean Biodiversity Protection Community.

As a general consideration, MedCities Secretary-General stressed the fact that cities must create networks and work together to have more strength against higher and supra-organizations and decision-makers to achieve their sustainable objectives (SGDs). He said: “Cities are confronted with common challenges, and Mayors understand well the problems other cities are affected with and can learn from each other“. Another main idea that was raised during the sessions was about how municipalities work together and collaborate to find solutions for the climate crisis through MedCities network: “Cities are part of the solution and without them, nothing can be done. So when a State or supranational organization makes a law or takes a decision, it must count on cities to develop it and make these facts come to reality as cities are the first ones having to implement changes“.

Some concrete examples of projects that help cities in their decarbonization process were explained in the IEMed session. Mr. Canals talked about A’SIMA Tunis, MAIS in Sfax, the Valeur Gabès project, or Tanger Accueil -in this case, talking about how the human aspects need also to be taken into account when talking about sustainability-. Panelists also talked about what ‘decarbonization’ means at different levels; from electrification and gas imports to infrastructures and climate cooperation, to the human scale of it. Short and long-term measures that the European and Mediterranean shores levels need to be implemented to really achieve the Green Agenda.

The public could raise some questions and as far as mobility concerns, Mr. Canals answered one inquiry about decarbonization and he underlined the work MedCities is doing with Sfax (MAIS project) and how in the Mediterranean there is a large divergence among cities to put pedestrians, bike lanes and public transports in the center of decisions.

The main topics of the three sessions arose some debate among speakers and it was underlined the crucial role of local authorities to tackle coastal alteration or the power that individuals have to combat plastic pollution and illegal traffic and plastic waste, as a critical element to reducing carbon emissions. MedCities Secretary General explained the waste management optimization project, Med4Waste.

For the Mediterranean Biodiversity Protection Community session, MedCities Director, Mr. Oriol Barba participated to talk about the role of the cities network when talking about waste management, also linked to marine litter: “We work in cities as pilot areas to reduce single-use plastic in tourism and fishing sector as we know that in coastal cities, marine litter starts in land activities“.