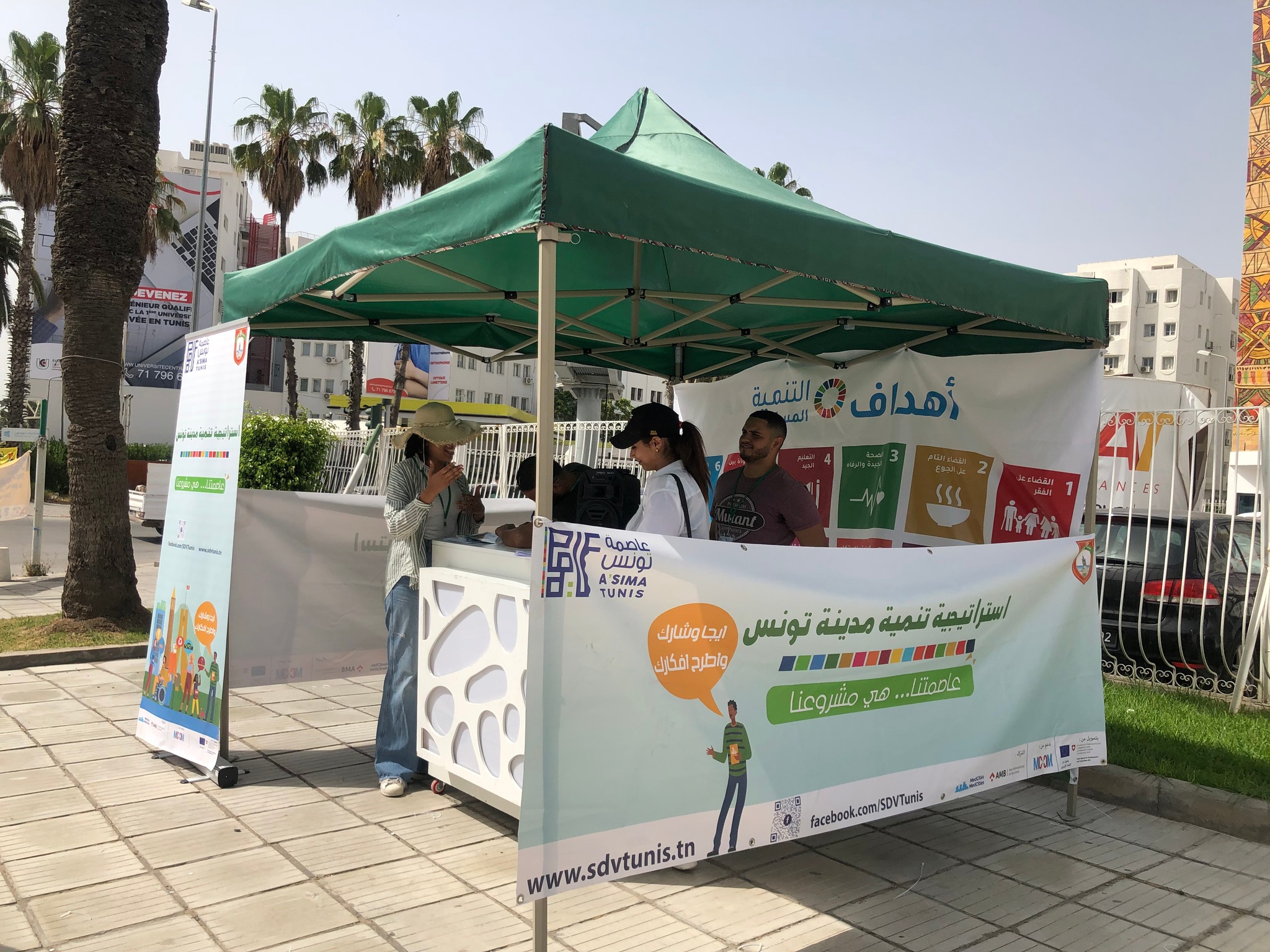 This June, the A’SIMA Tunis project has focussed on the launch of a citizen participation campaign. Participation from citizens, civil society, and institutions is one of the main elements the A’SIMA Tunis project and of the Tunis Strategic Plan (SdVT) at the current phase, that of the strategic framework, where the shared vision and the strategic priorities of the city of Tunis are being debated.

The citizen participation campaign has two main objectives. First, to communicate and inform citizens on the strategic planning process that the Municipality of Tunis has embarked on for the medium and long term. Second, to collect citizens’ inputs on the strategic framework proposed and to understand their thematic priorities for the future of Tunis.

In order to reach a diversity of citizens, the campaign is taking place both online and in the streets. Indeed, since June 20th, three different stands are installed in more than 15 locations across Tunis and the Grand Tunis (such as Bab Bhar, Belvedère Park, and the lake promenade…), for more than 20 days. Citizens approach the stands and the local staff explains the context of Tunis’ strategic plan and invites people to fill in a survey to collect their opinions. So far, the teams have gathered more than 4.000 surveys.

Meanwhile, the communication campaign of Tunis Strategic Plan is also taking place online through several social media such as Facebook and Twitter. A website dedicated to explaining the SDVT and citizens’ participation will be launched in the coming days, as well as a presentation video.

Also, during the month of June, substantive work was done to identify the strategic projects that will complete the strategic framework. On the 8th and 9th of June a training took place, with the consultants of AVITEM, on how to identify complex urban transformation projects, in presence of several members of the SdVT steering committee and municipal technical and elected staff. Furthermore, the expert team of the SdVT worked together with the Municipal technical committee and the methodological expert on the first list of strategic projects.

Last, the project is also organising some activities related to national networking. From the 28th to the 30th June, a workshop on the network of Tunisian cities for local strategic planning (réseau RPL) is organised, together with the National Federation of Tunisian Cities, in order to prepare policy recommendations on the recent code of territorial planning and to advance in the results of the network.